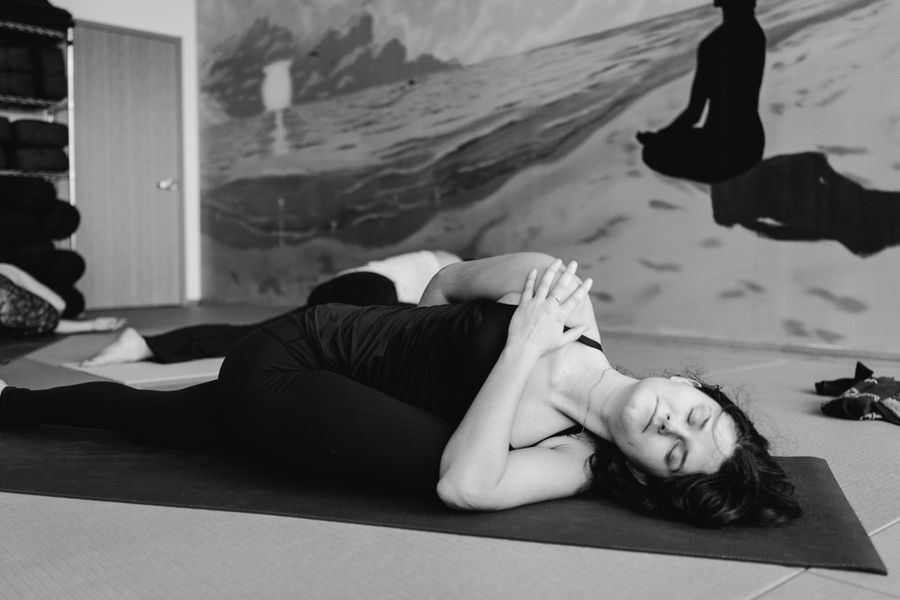 Give yourself enough time to arrive at the studio, hang up your coat, take off your shoes and socks, and turn off your cell phone. You’ll need to sign in and pay for class, which often involves a bit of paperwork if you're new to the studio. You’ll also want to give yourself a few extra minutes to lay out your mat, gather props, and bring your breath to an even and steady pace.

After all, it's pretty challenging to get centered if you're racing in just as class is getting started, and there’s little worse than being the cause of a disruption when everyone has just begun to relax. Usually, arriving a good fifteen minutes before class starts is appropriate (not too much more, as sometimes the teachers need prep time, or a prior class may still be going on in the studio). What should you do if you ARE late and class has begun? Check at the front desk for the protocol. Most teachers don’t mind if you slip in silently and take a place in the back. No one should be too uptight. It is yoga, after all.

Turn off Your Electronics

Phones, wrist watches, iPads—anything that dings, rings or buzzes—should be turned off.

Want to know what can get all eyes on you in a yoga class faster than a no-handed headstand? When the peaceful silence is interrupted by a siren wail, otherwise known as the ring tone you gave to your mother-in-law. AWKWARD! Phones, wrist watches, iPads—anything that dings, rings, or buzzes—should be turned off before class.

Even that dangly necklace that your kids made for you that jingles as you move shouldn’t make its way into the practice space. Leave anything that makes noise but doesn't breathe outside of the studio. Not only do you not want to distract others, but you want to be totally present in class without the outside world demanding your attention. Even if it is your mother-in-law.

If eye pillows are available for use in shavasana (final relaxation), there are most likely tissues for your use as well. Place the tissue between your eyes and the pillow to protect those peepers and keep things sanitary.

Be Aware of the Space You Take

Though the teacher often moves around the room and does demonstrations from various places in the studio, be aware of where you’re placing your mat so you don’t sit yourself directly in front of someone else. It is common courtesy to stagger yourself so that the person behind you has a clear view of the teacher.

Don’t Chat with the Person Next to You

Sure, make friends with your yoga neighbors because, after all, yoga is all about “uniting,” right? Often the yoga studio is a prime gathering space for like-minded folks, but keep the chatting in the coatroom. Once you enter the studio, it’s time to turn inward, so don’t be offended if that uniting you were yearning for isn’t happening when you’re on your mat. Many students relish practice as a time to turn inward and become centered, and the time in the studio before, during, and after class is to some a sacred time to ¨stay on your mat.¨ Plus chatting during class is distracting and even dangerous when challenging poses are being taught and people need to stay focused.

You might wonder if it’s okay to ask the instructor a question during class. This really depends upon the teacher. Some studios encourage full exchanges of dialogue, but if you’re in a setting where the teacher is the only one speaking, respect that atmosphere in a way that still allows you to get the most out of class. If you have a question that needs answering, by all means ask it, but aim to get the attention of your teacher discreetly so that he comes over to your mat, and you can ask him one-on-one.

Usually studios have spray bottles available to clean off the mats at the end. Spritz, then wipe the mat down post-practice (especially if the mat you were using isn't your own). Put away all props neatly and where you found them. The few extra seconds it takes each student to stack the blocks so they don’t tip, roll the mats so they are even, and fold the blankets saves lots of time for the instructor.

Being gentle in voice, movement, actions, thought, and attitude respects those who come to yoga for a safe, uplifting, truthful environment.

Practicing non-violence (ahimsa in Sanskrit) at the studio means coming into the space in a peaceful way. Gossip, angry complaining, and negative attitudes are best left for the gatherings around the water cooler at work. Instead, being gentle in voice, movement, actions, thought, and attitude respects those who come to yoga for a safe, uplifting, truthful environment. Hopefully, this gentle way of approaching and being will dissipate negativity not only during yoga class but at the water cooler and other areas of life as well.

Your Response Is Noted

Often, at the close of class, the teacher will bow his head and say “namaste” to the class. If it moves you to do so, you would respond with “namaste” back. You may notice the other students around you saying it as well. Namaste is your teacher’s way of saying he honors the divinity in you. Your saying it back says you honor the divinity in him too